On our Literature class we read the story “The Rain Horse” and then worked on some questions, I worked with Lucila Giambruni.

1. “As the young man came over the hill the first thin blowing rain met him. (…) He shivered holding himself against the cold. …felt nothing but the dullness of feeling nothing. (…) A wave of anger went over him: (…) anger against the land that made him feel so outcast.”

2. “…a thin, black horse was running across the ploughland towards the hill, its head down, neck stretched out. It seemed to be running on its toes like a cat, like a dog up to no good.”

3. In blinding rain he lunged through the barricade of brambles at the wood’s edge.

4.“At the wood top, with the silvered grey light coming in behind it, the black horse was standing under the oaks, its head high and alert, its ears pricked, watching him.”

5. “The black shape was above him, right across the light. (…) …he fell backwards down the bank, and leapt again like a madman, dodging among the oaks… He was well out in the middle of this before he realised that he was running alone. (…) …this last attack had cleared up one thing. He need no longer act like a fool out of mere uncertainty as to whether the horse was simply being playful or not. It was definitely after him. He picked two stones… (…) He began to run. And as he run he heard a deeper sound running with him. He whirled around. The horse was in the middle of the clearing. …coming straight for him. Ge let out a tearing roar and threw the stone… It dropped back (…) He could have killed the horse at that moment (…) …flung the one in his right hand. (…) …and the horse actually stumbled.

8. “He picked two stones about the size of goose eggs” he took the biggest stone he could find, and kept it, in order to defend himself. He didn’t know what the horse was going to do, so he had to be prepared for the worst.

9. “With all his force he threw” “his arm began to ache with the unaccustomed exercise” With this quotations we can realize that this wasn’t a common thing, it’s not that a man usually throws stones at an animal. Because it’s not usual that nature reacts or attacks man. This story portrays a man and nature relationship, in which the man is not the only one presented as a threat. Nature does strike back, as seen in “The Rain Horse”.
10.11. “Keep your distance and you’ll not get hurt” at this point the man was dominating the situation, was superior, and nature was no longer a threat to him. The man used his intelligence, and attacked him back, so that he wouldn’t get hurt.

12. “Like a spike of bone stabbing” the protagonist felt a pain so big, and so profound that it felt like someone was stabbing his bones. He felt a part of him was missing, “cut out of his brain”, and this place made him remember that.

On our Literature class we read the poem “A different history” by Sujata Bhatt, which was the last poem we had to read for a IGCSE exam. We analysed it in class and worked on some questions. Pato, our teacher, shared with us this slideshare to help us work on Sujata’s poem.

In our Literature class we read the poems “Continuum” by Allen Curnow and “The Woodspurge” by Gabriel Rossetti. Both of the poems have things in common, let’s see if you agree with my analysis:

Both of the poems share the same tone, the mood in which the poem is written and how the character behind the poem is feeling and what they’re going through. The tone of both of the poems is depressed, melancholic, gloomy, desolated, etc. In both of the poems we can realize that the voice is looking for something, something on their inside that is lost, they don’t know what it is, or how to find it. They are suffering on the inside, depressed, trying to get out of their misery. In “Continuum”, the voice is looking for inspiration, he wants to write a poem, but he can’t, so he’s depressed, and lonely. In “The Woodspurge”, the voice is all alone too, depressed, experiencing grief, sorrow. He’s sad and by himself, he’s lost inside, and does not know how to overcome his anguish.

In Biology we are now studing the diseases of Diarrhoea and Cholera. We watched a video about it and then had to answer some questions based on it. I worked with Lucila Giambruni.

2) In the video, Cholera spread through the village by transmitting the bacteria through the vomit and diarrhoea that went to the river and then the water of the river was used by people to cook and wash their hands. Also, the flies fed on this water and so caught the disease, and then transmitted it to the food which would be then eaten by the people.

3) Diarrhoea is a conition in which feaces are discharged from the bodies frequently and in a liquid form.

4) The Cholera bacterium lives in the small intestine where it produces a toxin that stimulates the secretation of chloride ions. This ions accumulate in the lumen of the small intestine and increase the concentration of fluids, lowering the water potential.

5) The boy treated his father by giving him a mixure of pure water, salt and sugar. After this, after his father regained some strenght, he took it to the hospital to be treated in better conditions.

6) Ways to prevent the disease:

-Wash your hands often
-Boil water in order to kill Cholera bacteria
-Peal food which might be contaminated by bacteria an also boil it
-Put toilets at least 30 meters way from the river so as no o contaminate it with the bacteria of the feaces.

As in the first term, for my Oral&Writing class, I had to read a book and do a Booktube about it. The book I read was “Pilgrims” by Elizabeth Gilbert. Hope you like it!

In our Biology class we have been studying the Digestive System. This is a photocopy we compleated on our own by looking at a video, and a summary we copied at the back from Male. 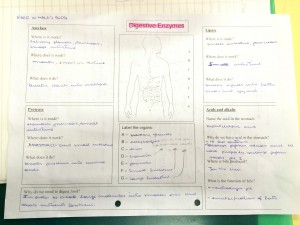 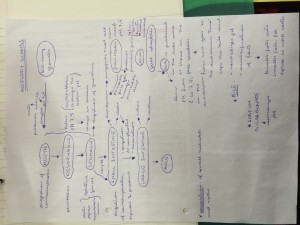 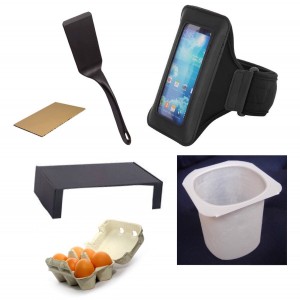